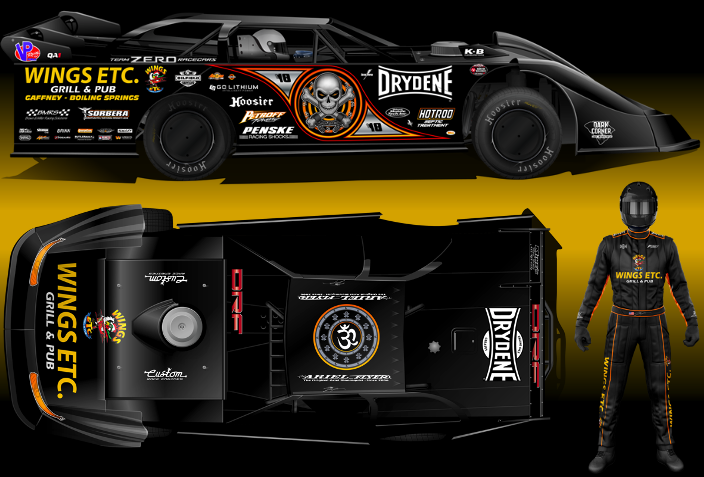 Mooresburg, TN. — Scott Bloomquist Racing kicked off the 2021 racing season in Florida with the World of Outlaw Morton Building Late Models at Volusia Speedway Park. Since then, SBR has been strategically preparing for the remainder of the season, but with their primary focus on the “March Madness” portion of their 2021 schedule.  In total, four different primary partnerships and paint schemes will accompany the #0 team during the month of March. Along with this release breaking down our exciting new relationship with WINGS ETC. Gaffney – Boiling Springs, the Hotrod Septic release yesterday, and the Go Lithium announcement Tuesday, the team will continue releasing more details regarding their “March Madness” lineup throughout the duration of this week.

This upcoming weekend’s race with the World of Outlaws Late Model Series at Smoky Mountain Speedway will kick off a 6 week stretch of racing for the #0 team, where they with unload their Drydene Engine Oils and Greases Team Zero Race Car.

WINGS ETC. is set to debut as the primary partner of Scott Bloomquist Racing and the #0 during this month’s World of Outlaw Late Model weekend at Cherokee Speedway in Gaffney, SC on March 26th and 27th and will make another appearance later in the year on Friday, October 1st. SBR is extremely excited to not only have the opportunity to work with Wing Etc. as a new primary partner, but they’re equally excited to have a home base to hang out, grab a bite to eat and make some memories at after the races as well!

WINGS ETC., JUST ANOTHER SPORTS BAR? NAH… Their goal? Good Food. Great Times. Great (but simple) Food. No gimmicks. The Wings Etc. “Happiness Centers” are filled with big TV’s, friendly service, ice cold drinks and are the ultimate family-friendly sports bar for anyone and everyone. Visit WINGS ETC. at www.WingsEtc.com. Be sure to visit the Gaffney, SC and Boiling Springs, SC locations during the upcoming race weekends, but more importantly, find a “HAPPINESS CENTER” near you TODAY! Be sure to follow Wings Etc. on social media for the latest news and information.