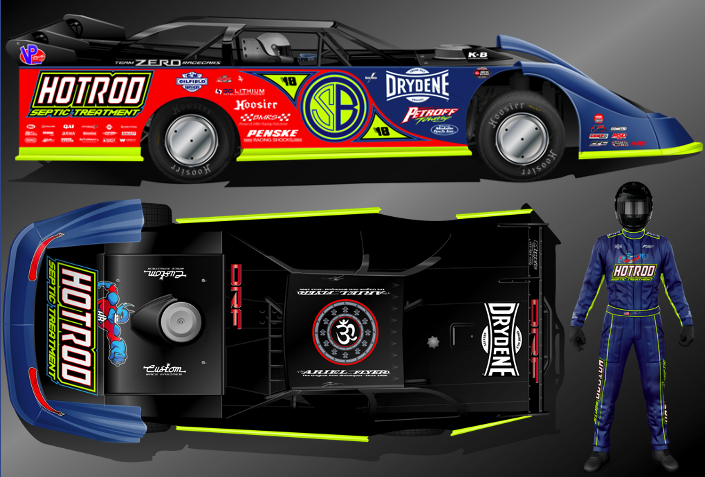 Mooresburg, TN. — After kicking off the 2021 racing season in Florida with the World of Outlaw Morton Building Late Models, Scott Bloomquist Racing has been strategically preparing for the “March Madness” portion of their 2021 schedule. In total, four different primary partnerships and paint schemes will accompany the #0 team during the month of March. After this release of the exciting new relationship coming to life with HOTROD Septic, and the GO Lithium announcement yesterday, the team will continue releasing more details regarding their “March Madness” lineup throughout the duration of this week.

This upcoming weekend’s race with the World of Outlaws Late Model Series at Smoky Mountain Speedway will kick off a 6 week stretch of racing for the #0 team, where they with unload their Drydene Engine Oils and Greases Team Zero Race Car.

HOTROD Septic is set to debut as the primary partner of Scott Bloomquist Racing during this month’s Bristol Dirt Nationals at Bristol Motor Speedway on March 19th and 20th and will make a handful of other appearances throughout the 2021 racing season on some of the sport’s biggest stages, including Eldora Speedway, Fairbury American Legion Speedway (FALS) and Texas Motor Speedway. SBR is looking forward to not only have the opportunity to represent and work with a new company, but they’re excited to unveil a unique new look for the #0 as well.

Founded in 2018, HOTROD Septic manufactures agricultural products for large, confined animal facilities to deal with common issues such as odor, sludge, solids and contamination. Visit HOTROD Septic online at www.HOTRODseptic.com . You may also contact them at (815) 848-3014. Be sure to follow Hotrod Septic Treatment on social media for the latest news and information.